Not so long ago, self-styled ‘vicarage chic’ poster boy Matt declared himself to be an accidental hipster due to his medically-imposed six month hiatus from shaving. Having previously sported a moustache, as his beard grew into its fearsome bushiness, the ladies went wild. His chin attracted the sort of spontaneous yet gentle caressing that women reserve for the gravid bellies of their pregnant sisters, with a similar degree of cooing.

Over a surprisingly-short time Matt’s beard became less Jeremy Corbyn and more Grizzly Adams. It was as conspicuous from the back as the front; sticking out in sideways tufts either side of his head like a lady’s luxuriant pant moustache. When the time came for an overdue trim, he knew where to go.

Ryde’s The Gambling Man is the seaside town’s grooviest barbershop. Its prominent corner location is enhanced by its vast logo and shop front branding by Pinkeye Graphics. It’s a busy salon; punters have been known to queue for up to two hours for attention from the team’s groomers. Matt presented himself to Jack Wharton – the senior barber – and the makeover commenced.

Jack employed quite an arsenal of tools and techniques. There were the regulation scissors, plus clippers with a variety of guard lengths from shaved to a bit less shorn for the perfect skin-fade. Jack wielded his cut-throat with competence and also an electric razor to see off the last of the neck hair. Hey, he even used a hair-dryer with a barrel brush to finish the face fuzz. 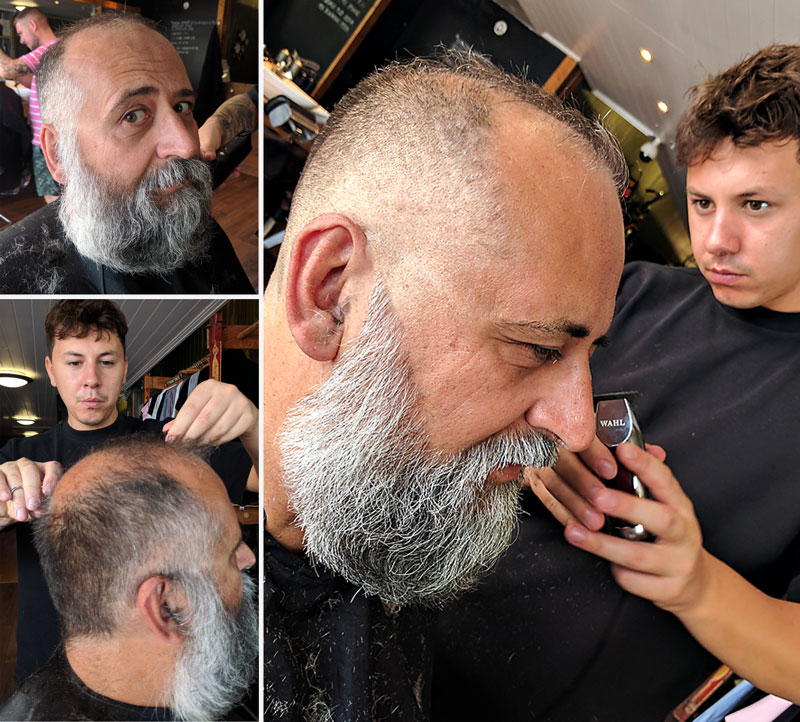 Matt’s beard was reduced in width but the length stayed, giving it a more pleasingly considered shape that its previous Bellamy-esque appearance (and that’s climate-change denier David, not multi-instrumentalist Matt, kiddiewinks). The top retained a few wispy hairs but the rest of his scalp was pretty denuded. The accidental hipster became a deliberate hipster. Just the wardrobe to sort out now; although neck and knuckle tattoos maybe a step too far – he doesn’t want to frighten the congregation.

Here is Matt’s film of his makeover.

The Gambling Man: Matt’s makeover from Pinkeye Graphics on Vimeo.

Regular readers might notice a bit of a theme in some of my street style spots. Holographic fabrics, shiny metallic accessories and silver jewellery…